Having been attended conventions for many years now, one of my first was StarFest back in 2002, I’ve come to realize that there are just some things I cannot live without…as a con-attendee that is. Now, my experience has been attending local conventions as a vanilla guest. The list for out of town conventions, Cosplay attendee, and as a vendor will vary, but those are for another day. So, here is my local Comic Con (and other scifi/fantasy/pop culture convention) Survival Guide.

You’d be surprised how many people over look their footwear. If you’ve never attended a convention, you might be seriously underestimating how much walking you are going to do! Most conventions, even the smaller regional ones, have panels and other attractions spread out across the entire venue. It’s not very often you’ll be able to go to one room for a panel and stay in that room. As a matter of fact, they have to empty each room before/after each presentation/panel to give people who will be waiting in line to come in. Oh yes, there will be lines. Lines can form hours, yes plural for hour, in advance for main event presentations. So do not underestimate the importance of good footwear.

Hydration is a biological necessity. Remember all that walking you’re going to be doing (see No. 1) you’re gonna need to take a drink from time to time. Not to mention when you put yourself in the middle of thousands of other warm bodies, you’re gonna sweat…a lot! Most convention centers will have drinking fountains, some of the nicer ones will have fountains with faucets for refillable water bottles. You don’t need anything fancy, although those Bluetooth enabled Water Bottles are pretty bad ass, a simple plastic water bottle will do. I prefer a reusable 27oz stainless steel sports bottle that I can clip to my backpack with a carabiner. The metal is durable and safe to drink from. Also, the one I have has a mouth wide enough to put ice cubes from the kitchen freezer into, thus keeping my water nice and cold.

You are going to either see a bunch of stuff you are going to want to buy or you will have a few things you will want to take with you, i mean you’re reading this list after all! A nice backpack is vital to carrying around all the stuff you will be taking/buying. Sure, you’ll get a cool bag when you buy stuff, sometimes you gotta pay extra for the real nice con bag you’re going to see people walking around with. I like to split the difference and carry a shoulder bag. Think of it as a half backpack with only one strap. It’s not too big to lug around and won’t take up a lot of room if I put it down on a chair next to me.

It doesn’t matter if you have a DSLR or a point & shoot, a film camera, or even just a camera phone. You are probably going to want to take pictures of the con. You may even want to take pictures with cosplayers or other attendees…more on cosplayer photos later. Make sure you can either fit your camera in your backpack/shoulder bag and make it easy to get to or have it on a neck strap. If you really want to, you can carry a camera bag, but I find that it can be one too many bags at that point.

Really though, do you ever leave home without it? I mean you’re gonna wanna live tweet the man event panel, or the autograph you just got. I think this one could have gone without mention…could have, but didn’t. 😛

Just make sure you bring extra batteries, extra memory card(s) or film if you roll old school, and a wall or battery charger. Nothing sucks more than running out of juice as a group of awesome cosplayers comes walking down the hall, except maybe running out of space on your memory card as a celebrity comes by and says hello! You’ll want to make sure the wall charger for your cellphone is included in your bag. Sure you’re gonna be walking around a lot, but chances are you’re going to be using your phone while you aren’t. Make sure you can plug it in and keep it charged while you break for a bite of lunch/dinner or while you take a seat in the halls between panels. Some convention centers have charging stations but believe me, there are never enough. There are usually plenty of wall outlets in the halls and in the panel/conference rooms. Be polite and only plug in if your phone can be out of everyone’s way. I will usually leave my phone in my bag and have it right next to the wall outlet. People are more likely to see a shoulder bag and walk around it, rather than stepping on a smartphone.

7. Wallet or money container of some sort

You are gonna wanna buy stuff. If you’re like me, you are going to want to buy A LOT of stuff! Gotta have money to pay for it. That’s where a wallet comes in, gotta keep your money somewhere. For the XY chromosomes reading this, most of you already got this covered. For the XX chromosomes out there, you may want to consider buying a wallet or a small billfold of some sort. Something big enough to carry the essentials and not much more.

Now that you have a wallet or billfold, you need to put something in it. Cue the cash, credit cards, and your ID. Cash, because not all vendors take credit cards. Credit cards because some vendors DO take credit cards. Your ID because, if you’re over 21, you might want a beer or wine or spirits of some sort. Denver ComicCon releases a craft beer each year, made just for that con. Can’t buy a drink without that ID.

You’re gonna need your geekin’ badges! Can’t get in without em. Some cons will mail/ship you your badge ahead of time. Others have you get them when you first walk in. The first option is my preferred. Denver ComicCon did the former for the first couple of years. In 2015 they did the latter and it felt like a much smoother entry. DO NOT LOOSE YOUR BADGE! Check each con’s policy on lost badges to be sure but, play it safe and operate under the understanding that if you lose your badge, you will not be allowed back in!

Plan ahead, it doesn’t have to be a minute by minute plan but at least have an idea of what panels and events you’d like to attend. That being said…

BE READY TO TOSS YOUR PLAN OUT THE WINDOW!

Yeah, you read that right. You will probably not be the only person who wants to attend the “Cosplay Armor Creation 101” panel and the rooms can and do fill up quickly. You had better come to terms with the good possibility that you will not make it in to every panel that you want to. Don’t be afraid to try though. Conventions will often times have their events/panels schedule online long before the doors open, months in advance even. So make a list of the date, time, and room number/location of each panel you want to attend. Denver ComicCon uses an app called GuideBook. This is a great option since you are going to have your smartphone with you (No. 5) anyway. GuideBook will even let you create a custom day by day schedule for your own personal con experience, including alarms to notify you when/where your next event will be!

Yup, make sure you are fully stocked up on your manners. Especially when it comes to taking photos of Cosplayers. They will often spend a great deal of time on their costumes and they love showing off their work, but please be courteous and considerate of their time and comfort. Always ask for permission to take their photo. A simple “Hi, can I please take your picture?” goes a long way. Be respectful if they say no, after all, some of those costumes can be really uncomfortable.

Cosplay Is Not Consent

Don’t be all grabby and creepy. If you are, fully be prepared to be escorted and banned from the convention at the vary least. The internet is full of horror stories about cosplayers being groped and having rude remarks made to/about them. Remember, that is someone’s child/mother/father/sister/brother, not the 3D pixelated object of your creepy, late night gaming sessions. No one wants to get punched in a crowded convention hall.

Speaking of crowded, there WILL be crowds. It’s easy for people to lose their cool waiting in line for a panel, or in line to buy a souvenir pint glass. Just try and keep mellow. It does you know good to fly off the handle cause someone dressed like Ash Catchem bought the last Minecraft hoodie that you were wanting to buy. Once again, if you do, be prepared to be escorted & banned from the con.

Conventions are a fun, friendly environment to let your geek flag fly. I mean, where else are you going to find yourself surrounded by thousands of people who have such similar interests as you?! Go on, make new friends! I’ve heard of marriages starting as con friends, so who knows what the future cons hold in store for you. Just be open to the experience, be prepared , and most importantly…have fun with it! 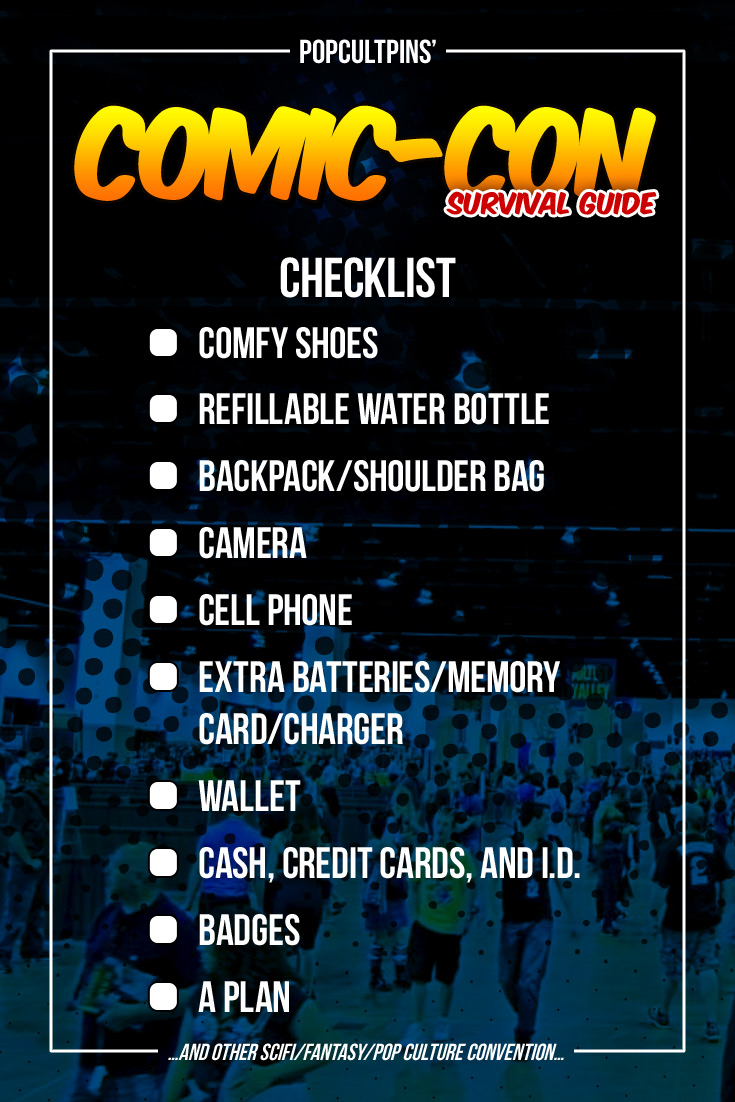